#repost @fangoria
#Repost @tchalamet
From a period-piece werewolf film to a gonzo Western-Samurai-thriller starring an unhinged Nic Cage, this year’s varied selection of genre films set for the (virtual) @sundancefest (Jan 28-Feb3) are sure to shock, delight, terrify, surprise & provoke. Check out our list of 15 genre films we’re looking forward to at #Sundance2021 (link in bio) #sundance
#Repost @johncarpenterofficial
Wherever you are, remember to make your own magic. #repost @cinespia
Promising Young Woman comes out tomorrow and it’s sure to start a conversation. Check out our review from it’s premiere at Sundance at link in bio. #promisingyoungwoman #careymulligan #emeraldfennell #sundance

It’s the 30th anniversary of Pet Sematary (1989), the original film adaptation of Stephen King’s terrifying novel about death, grief and letting go, based around a family who moves to a small town in Maine and soon discovers that the line between the living and the dead is not to be crossed without horrifying consequences. To celebrate, Paramount has released a new film adaptation, Pet Sematary (2019), along with a deluxe 30th Anniversary Edition Blu-Ray of the 1989 version.

As a long-time fan of the Mary Lambert-directed original, I was surprised to recently learn that, as of this writing, it has a mere 50% Rotten Tomatoes score from critics (with 32 reviews), and 59% audience score (with 97k+ reviews). I recently re-watched the film, which scared the hell out of me as a child, and it 100% holds up today, so I’m here to defend this underrated horror classic with 10 reasons why, on its 30th Anniversary, Pet Sematary (1989) definitely, positively, absolutely still slaps.

The immensely talented Fred Gwynne is probably best remembered for his role as the spookily lovable Herman Munster from The Munsters, but he brought a kind and well-meaning yet mysterious, almost mystical quality to the role of Pet Sematary‘s Jud Crandall – the long time resident and knowing neighbor who befriends the Creed family and ends up introducing Louis to the cursed burial ground beyond the cemetery. Lambert has referred to Jud as the “dark angel” of the story, and Gwynne’s inimitable take on the complicated character makes him sympathetic, while at the same time, odd and creepy, which totally checks out with the dark angel description.

Gwynne’s heavily Maine-accented performance anchors the 1989 film, and his unforgettable delivery of Pet Sematary‘s defining line of dialogue, “Sometimes, dead is better,” helped cement it in the pop culture lexicon. And that totally slaps.

Sure, the new Pet Sematary (2019) has a few dapper-diva Maine Coons who wear tiny neck-ties and show up to premieres and sit in director’s chairs and ham it up on Instagram, but let us not forget that the handsome British Blue cat from Mary Lambert’s version (who was chosen both for his thick fur and his uncanny resemblance to a stuffed animal) was not only spooky, but an absolute UNIT. 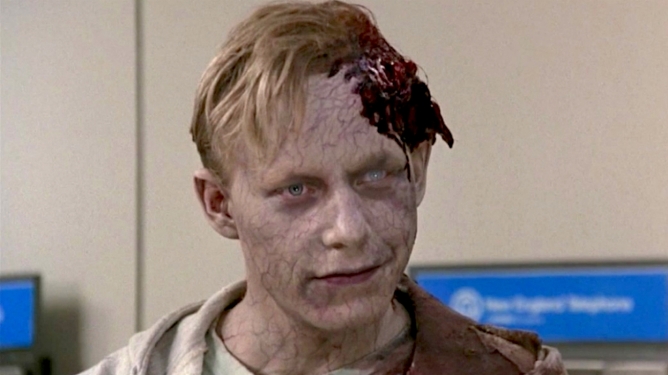 The poor hapless jogger Victor Pascow (Brad Greenquist) is the first patient Louis Creed encounters in his new job. Having been hit by a truck, Pascow does not survive, and – memorably – is also left with a giant, gaping head wound. His decomposing ghost then haunts Louis and his family for the rest of the film, mostly trying to warn them about the dangers of the Pet Sematary and how “the ground is sour.” Louis feels responsible for Pascow’s death, so he brushes off the encounters as a manifestation of guilt, but Pascow does eventually help Rachel make it home for the film’s finale. It’s all a bit Dickensian in its presentation, almost like a gorier “Ghost of Christmas Present/Future” type vibe (and if Charles Dickens doesn’t slap, then I don’t know what does).

Now, the new Pet Sematary (2019) features a Victor Pascow too (played by Obssa Ahmed), but he’s not as involved in the proceedings. In the 1989 version, his smiling, chatty, brains-dripping-from-his-head-ghost has an up-in-your-face-personality that manages to be both likable and scary to boot.

Let’s face it, Dale Midkiff in the role of Dr. Louis Creed is a bit of a babe. Sure, his acting feels a little soapy, as do most of the performances in the film, but it was the eighties, people! He was just DOING HIS JOB. Plus, his adonis-like features help add a Greek tragedy element to the proceedings as he spirals into grief, obsession and madness. Or something like that.

Anyway, thanks, Mary Lambert for giving us an eighties horror ZADDY.

The story of Timmy Baterman was a crucial element of King’s novel, and while it was not included in the 2019 remake, there’s a juicily entertaining segment dedicated to it in the 1989 film.

Timmy Baterman (Peter Stader) was the only person known to have been buried in the Pet Sematary, after being killed in the war back when Jud Crandall was still a boy. Timmy had come back from the ground as a mindless, carcass-eating, townsfolk-terrorizing zombie who eventually had to be set on fire, burning down a building and his father in the process. (Yikes.) Jud relays the story of Timmy Baterman to Louis as a pretty strong warning against burying Gage in the cemetery, clearly illustrating that, “Sometimes, dead is better,” because, you know, “they don’t come back the same.” Yet, even knowing the likelihood of his child coming back as a soulless monster, Louis buries him in the Pet Sematary anyway – a desperate act that gruelingly highlights the horror of grief and of not being able to let go. (Don’t worry, it’s only a slight distraction from his zaddy-ness).

Zelda is not only one of the most memorable characters in Pet Sematary but within the horror genre as a whole, and that is due both to Stephen King’s writing, and Mary Lambert’s vision in bringing Zelda to life for the screen. As written in the novel, Rachel Creed’s teenage sister who had been deformed by spinal meningitis and kept locked away like a “dirty secret” was frightening enough as a reminder of our ingrained fears of illness, death, disability and the other, and of how society often mistreats the infirm, but it was Lambert’s choice to cast a grown man, Andrew Hubatsek, in the role that gave the character a unique life of its own. Lambert initially auditioned teenage girls for the part, then decided to go with Hubatsek because she felt that putting a man in the role would be more frightening. SHE WASN’T WRONG.

The moment where, during one of Rachel’s nightmare flashbacks, Zelda stares into the camera and repeatedly cackles that her sister will “never get out of bed again,” is kind of unforgettable, and just as terrifying today as it was in 1989.

7.) GAGE AND HIS VELVET OUTFIT

Anyone who’s seen the 1989 Pet Sematary remembers the adorably terrifying Gage (Miko Hughes), the youngest member of the Creed family who is killed by a truck while flying a kite and then comes back from the grave as a tiny, scalpel-wielding, throat-gnawing, killing machine.

Part of what makes the film and his character so memorably spooky is the Victorian-era-esque blue velvet outfit he is buried in and which he returns in, complete with a tiny ivory walking cane and oversized top hat. One of a number of visual flourishes that add ambiance to the film, the outfit is even creepier because it matches a super creepy, Victorian-esque painting that hangs above the mantle in Rachel’s childhood home. EEk.

The idea of a child so small coming back to life as a murderer is both terribly dark and deeply sad, and the fact that Gage appears so angelic and doll-like in his velvet outfit makes it all the more impactful when Louis chooses to stab him the neck with a morphine-filled syringe.

Another of the many testaments to Mary Lambert’s visual flair and the skill and creativity of the film’s practical effects / makeup team, Rachel’s (Denise Crosby) oozing eye socket as she returns from the beyond to kiss her “darling” Louis on the mouth (presumably right before stabbing him with a big ass kitchen knife) is a horrifically entertaining and deliciously dark ending to an already very dark tale.

Mary Lambert had initially filmed what she considered a scarier but quieter ending (perhaps closer to the novel’s ending, which was also more subdued). After initial test screenings however, the studio pushed for something with a bit more pizazz, and the rest is oozing eye socket history.

Pet Sematary features not one but two(!) songs by the Ramones, who also happened to be a favorite band of King’s. Luckily, Mary Lambert was known in the music world from having directed a slew of big name music videos (including Madonna’s “Like a Virgin” and “Like a Prayer”), and she was friends with Dee Dee Ramone, so she was able to  help  secure the Ramones’ involvement.

The part where little Gage gets hit by a truck is so effective in part due to the tension built as the truck driver haplessly sings along to “Sheena Is A Punk Rocker” as he barrels down the highway in his multi-ton, “Orinco”-branded, Peterbilt tanker.

And of course, their title song for the film, with its straight-forward lyrics (“I don’t wanna be buried, in a pet cemetery, I don’t want to my life again”) and its boppin’ tune is endlessly catchy, surprisingly fun, and ended up becoming one of the band’s biggest hits -helping make the Pet Sematary property a bit of a pop culture phenomenon.

Pet Sematary the novel is one of Stephen King’s darkest and best works, a classic in its own right, so if you’re gonna make a movie adaptation, it certainly can’t hurt to have the author himself write the screenplay. Especially when much tends to get lost in translation on a typical adaptation.  His deep involvement on the 1989 film is one of the reasons the story flows well and checks out with the book and is, perhaps most importantly, still really scary.

Likewise, any Stephen King adaptation that features a cameo of the man himself, by its very nature, slaps. And this one is no different, as it features King as a minister delivering the dramatic funeral service at Missy Dandridge’s funeral.

Oh, and speaking of Missy Dandrige (Susan Blommaert), who worked as the Creed’s mousy, stoic, housekeeper, she’s one final footnote reason the original Pet Sematary still slaps. Her presence (excluded from the 2019 re-make) helps illustrate the odd quirky vibe of the townsfolk and the location itself, and her sudden suicide by hanging due to the pain she was experiencing from stomach cancer is a dark and haunting moment that you won’t find on film anywhere else.

So there you have it, 10+ reasons Mary Lambert’s Pet Sematary (1989) still slaps. I’m a big enough fan of Stephen King that I welcome any and all telling of his tales, but without a doubt the 1989 telling was and will remain an iconic horror classic.