In Swiss Army Man, Dano’s character rides Radcliffe’s farting corpse across the ocean, and that’s only the beginning of the weirdness… 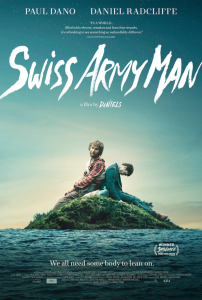 One of the most buzzed-about movies premiering at the Sundance Film Festival this year was also one of the most divisive. The insanely bizarre Swiss Army Man polarized audiences at Sundance, prompting both walkouts and standing ovations.

Whether they loved it or hated, people couldn’t stop talking about the weird-as-hell and wildly original film, in which a suicidally hopeless man named Hank (Paul Dano), discovers a dead body (Danielle Radcliffe), which he enlists to be his best friend -and multi-purpose tool – as he attempts to journey home.

Swiss Army Man was eventually picked up by A24 (Ex-Machina, The Witch) and is set to be released in theaters on June 17th. It written and directed by the music-video directing duo of Dan Kwan and Daniel Scheinert, also known simply as, “DANIELS.” The duo are probably best known for directing the music video for DJ Snake and Lil Jon’s Turn Down for What.