‘John Wick’ and ‘The Crow’ are both great movies that share some striking similarities.

Ok, I admit it. I hadn’t seen John Wick until quite recently. Though it had been at the top of my VOD “to watch” list for a long time, it wasn’t until I started hearing overwhelmingly positive word of mouth for John Wick: Chapter 2 that I finally set aside some time to enter the John Wick world. And I’m absolutely glad I did.

If you’ve seen it, you already know – John Wick is a great film – a simple yet stylish revenge tale loaded with fast action and slick stunts executed with military-style precision.

About 1/3 of the way through viewing it, I noticed something else. John Wick is essentially the same movie as The Crow (1994) – another great film of which I have long been a fan.

Some interesting backstory – John Wick director Chad Stahelski, a long-time Hollywood martial arts stunt man and stunt coordinator, was a friend of The Crow star Brandon Lee, and initially worked as a stunt double for Brandon on the 1994 film. After a tragic accident claimed Brandon’s life during the filming, Stahelski ended up acting as his friend’s stand-in during a series of reshoots to complete the film.

While Stahelski didn’t write the script for John Wick, it’s not a stretch to think that he would draw some artistic inspiration from what was clearly a very personal film for him.

And while the writer of John Wick, Derek Kolstad, has listed films like Ronin and The Raid as influences, its hard to not to look at John Wick and The Crow side by side and not see some similarities in the story department. It’s worth noting that the initial John Wick script was re-worked with Keanu Reeves and Thunder Road Pictures before making it to the screen. Whether any parallels in the final product were intentional, subconscious, or merely coincidental, it’s hard to deny their existence.

Not that I’m complaining at all. Both John Wick and The Crow are great movies in their own right, and if you’re a fan of one, you’re likely to be a fan of the other. They have plenty of differences – more than enough so to make them both worthwhile to watch, but let’s a take a moment to consider some of their similarities.

*Note, MAJOR spoilers for both The Crow and John Wick (Chapter 1) ahead.*

1.) The story begins with the Protagonist being brutally murdered by mobsters who break into their home.

In The Crow, Eric Draven and his fiancée, Shelly, are murdered in their apartment by a gang of goons who break in the night before Halloween, aka ‘Devil’s Night.’ Eric is shot then pushed out a window, while Shelly is further tortured and raped before dying.

In John Wick,the hero’s death is metaphorical – shortly after his beloved wife dies of an illness, mafia goons break into his house, beat the crap out of him, steal his car, and kill his puppy. The dog was a gift from his late wife and its death is not only cruel (I mean, they killed a puppy for god’s sake!), but it also represents the death of all that remains of John’s hope.

2.) The Hero comes back from the dead.

In The Crow, Eric is literally reborn one year later, clawing his way out of his grave and returning home, where he painfully remembers the details of his and Shelly’s deaths.

John Wick, we learn, is a legendary former assassin who worked for a Russian mafia gang but had left his hit-man life behind when he fell in love and got married. But after his dog is killed, he rips up the concrete floor in his basement, literally unburying the guns and gold of his former life, and is thus “reborn” as the single-minded killer he once was.

3.) The Hero spends the rest of the movie exacting revenge on his killers.

In The Crow, Eric tracks down his killers – T-Bird, Tin Tin, Funboy and Skank, and picks them off one by one.

In John Wick, John tracks down the puppy-killing goons – one of whom is the son of John’s former employer – and picks them off, along with a lot of other people who get in his way.

4.) The Hero’s revenge killings extend to a larger ring of criminals, ultimately leading to a take-down of a sprawling crime network.

In The Crow, T-Bird’s gang answers to a larger network led by a kingpin named Top Dollar. By the end of the movie, Eric has killed Top Dollar and his whole gang, ending a spree of arson and other crimes that have been plaguing the city.

In John Wick, the puppy-killing perps are underlings in a larger Russian crime syndicate, and by the end of the movie, John has taken out the big crime boss and his entire gang.

5.) The Hero has a guardian, and also has super-human abilities.

In The Crow, Eric Draven is aided by a mystical crow, whose powers not only bring Eric back to life, but also instill him with the ability to heal from any injuries sustained.

John Wick doesn’t have a mystical crow, but he does have a guardian in the form of his mentor, Marcus (Willem Dafoe). John also has otherworldly skill as an unstoppable assassin to the point that he’s earned a supernatural nickname, “Baba Yaga” or “The Boogeyman.” Throughout the course of the movie, John does get injured but pushes on with super-human-like endurance. He’s essentially bulletproof, “a man of focus, commitment, sheer will,” who will let nothing deter him from exacting his vengeance.

6.) The use of flashbacks as a reminder of what the hero is fighting for.

In The Crow, Eric has flashbacks both to happier times with Shelly and also of the night of the murders.

John Wick has flashbacks of his wife and her illness, and he also repeatedly plays back a video clip on his phone of the two of them happy together at the beach. 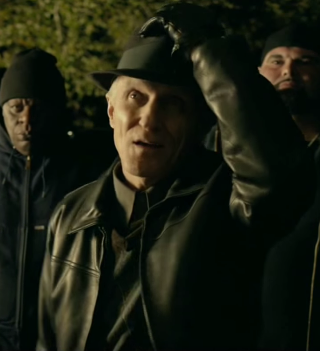 In The Crow, he plays T-Bird, the ringleader of the smaller gang that murders John and Shelly.

In John Wick he plays Charlie, the “cleaner.”

WHAT MORE PROOF DO YOU NEED?

And there you have it. That’s my case for why I think John Wick and The Crow are essentially the same movie. Do you agree with this assessment? Can you think of any other similaries? What other movies could be considered the same or similar to either John Wick or The Crow? And finally, if you have not yet seen John Wick Chapter 2, what are you waiting for? It’s an excellent follow-up to the first John Wick (and as far as I can tell not the same as The Crow 2 City of Angels, in case you were wondering).