Zombie Nazis meet a young band of American paratroopers, and the fate of the war and the world hang in the balance.

Jovan Adepo as Boyce in the film, OVERLORD by Paramount Pictures

Is there ever a bad time to watch zombie Nazis get creamed on a big screen? Perhaps not, but now certainly feels like a good time for the arrival of Overlord, which lands  on Digital today.

Produced by JJ Abrams – who conceived of the story along with screenwriter Billy Ray – the persisting rumor is that Overlord was initially planned as a narratively-linked installment of the Cloverfield franchise (or the “Cloververse,” if you prefer). Whether or not that rumor is true, it’s now clear that the final product is not a Cloverfield movie, but it does have the hallmarks of a JJ Abrams’ production, including a major crash scene, monsters, a governmental/military conspiracy, a sci-fi element, a brutal interrogation scene, and a relatively unknown director (Julius Avery), to name a few. Overlord also bleeds into Lucasfilm/Spielberg territory with its action-adventure type feel and of course, Nazis. (Director Avery christened it “Indiana Jones on acid.”)

Set during the later stages of World War II, just before D-Day, Overlord centers around a group of American paratroopers on a mission to destroy a German radio tower within a (Nazi-occupied) church in rural France.

Their respite is short-lived, as they soon come face to face with the local baddie Nazi commander Wafner (Pilou Asbæk), but after Boyce discovers an experimental Nazi laboratory, the gang soon learns that battling “living” Nazis is the least of their worries. Action, violence, gore, some wild, cringe-inducing moments (in a good way) and a bunch of dead (and undead) Nazis ensue.

Jovan Adepo, who was nominated for several awards for his role in 2016’s Fences, is convincingly likable here as earnest protagonist Boyce, an unwitting soldier with a hero’s heart, although he’s not given a ton of range to work with in his character – even with Boyce’s Louisiana/Haitian backstory and his love-interest potential with Chloe. Fellow rising star Wyatt Russell (who is the son of Kurt Russell and Goldie Hawn) has the meatier role, and he channels major Kurt Russell vibes (think MacReady from The Thing) in his portrayal of the no-nonsense, hardened, anti-hero Ford, signaling a promising career in the footsteps of his father (someone please cast him in the remake of Big Trouble in Little China or Escape from New York, stat). Both Boyce and Ford are worthy enough heroes to root for along with Chloe and the rest as they punch, shoot, burn and blow up Nazi zombies to try and save the war and the world.

There are, as one would expect, impressive special effects (both practical and digital), along with plenty of bangs, booms, and a good share of blood, guts and gore to go around, which makes seeing Overlord in IMAX a worthwhile venture for maximum effect. But oddly (or not so oddly), there are, perhaps, fewer zombies than one might hope for. This could be related to the fact that it’s the first R-rated film from Abrams’ Bad Robot Productions, and the fact that Abrams’ has traditionally underplayed the actual screen time of his monsters, leaning a little more into the idea of their presence as a tension builder, than the actual realization of them on screen.

Still, it’s a pretty straightforward, enjoyable ride, tropey yet fun, thrilling enough to put you at the edge of your seat, and hey, who doesn’t enjoy rooting for the side that’s kicking Nazi butt? Its release feels timely against today’s political climate and it stands out amongst the current crop of horror films for its blend of monster movie, action adventure film and war movie.

In the end, Overlord is exactly what you think it might be: a slickly-produced, zombie-Nazi-killing-action-adventure-sci-fi-horror of a good time.

Overlord is  on Digital now, and will be available on Blu-Ray on Feb 19th. 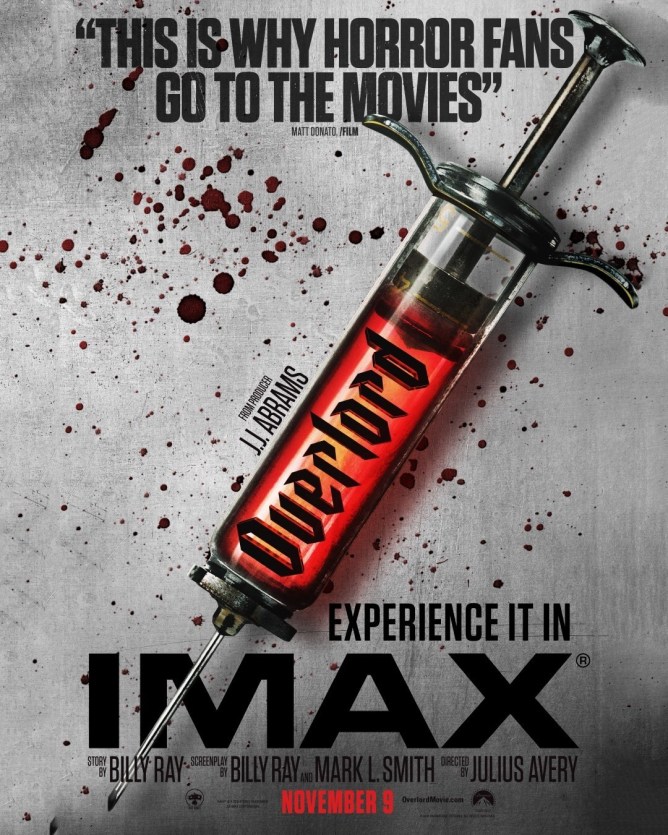