You may have heard there’s a new(ish) wave of interactive entertainment that’s been sweeping the US, having already gained popularity in places like Asia, Europe and Eastern Europe. Based on a combination of concepts from video games, board games, mystery novels and films, real-life escape rooms are live, interactive games in which the participants must work together to find and decipher clues and solve puzzles in order to “escape” from a locked room.

Los Angeles is currently the top city in the US for number of live escape rooms. Think you have what it takes to escape? Check out our reviews of 5 LA area escape rooms and decide for yourself!

Cannibalistic serial killer Edward Tandy has you locked in his basement, and has designed a twisted game in which you have 45 minutes to escape, or risk being “captured, caged and consumed.”

This is the horror-esque premise upon which “The Basement” escape room is based, and, as fans of horror films, haunted houses, and scary things in general, we were all for it.

This is not to say that The Basement is terrifying – it isn’t – but the set design, production value, atmosphere and theme are evocative of a horror film, and we found it to be a very fun, immersive experience, reminiscent of immersive theater productions such as Jon Braver’s “Delusion.”

The Basement’s website describes it as a “funnel puzzle,” for groups of up to 12 people, “where you will find numerous items and clues throughout the room. These items all come together to orchestrate your escape.”

Our group enjoyed the teamwork required within the game, but we also liked the fact that different people within the group could be working on different things at different times. We also liked the overall size of the space, with plenty of room to move about, lots of things to find and do, and a number of cool surprises. Sadly, we were not among the 12% to escape on our first attempt, but we did return at a later date and made it through the second time. Yay, us!

A couple of things to note:

The Basement was featured on an episode of The Bachelorette, in which the producers added live snakes to the room as part of the production. There are NO snakes or animals of any kind in The Basement for their normal operations.

For those who may – like us – wish to try their hand at escaping The Basement more than once, they do offer slightly modified versions of the same game for variety.

Keep in mind that The Basement accommodates groups of 12 people at a time. If your group is smaller than 12 people, you may have to share your experience with strangers. This can add to the fun, but also it may not be your cup of tea, so do plan accordingly.

For those who have completed The Basement, the owners offer two other escape rooms that are continuations of the storyline of Edward Tandy. Chapter 2, “The Boiler Room,” is a “linear and tactile puzzle” for up to 4 people, and their newest room, Chapter 3, “The Study,” offers “event and theatrical puzzles” for groups of up to 10 people.

In addition to The Basement, we also tried out The Boiler Room. The puzzles here must be solved in order, so if you get stuck on one thing, you can’t move on to the next. We found this structure somewhat limiting and, combined with the small size of the room, made for a less fun experience for us compared to The Basement. To be fair, we did The Boiler Room in the very early stages of its opening, and they had some technical glitches which also hampered our overall experience, but the owners were very kind to offer us to return at a later date, which we found exceedingly cool.

Of all the escape rooms we’ve tried thus far, The Basement has been our favorite, and we are very much looking forward to trying their newest room, “The Study,” soon.

I can’t remember exactly how we heard about Countdown Live Escape Rooms, but I can say that we were naturally drawn to their “Krampus”-themed room and knew we had to give it a try. The premise of the room is that your group is locked inside the apartment of the “Krampus Killer” – a homicidal version of the european anti-Santa who has left clues throughout his apartment as to his crimes and whereabouts.

The room itself is a fair size and the set-design, production value and atmosphere are decent enough in making you feel suddenly caught up in a warped-yuletide-crime-thriller movie scene. The puzzles were varied and many and overall we found it to be a fun escape room – even though we, alas, did not escape.

*Possible spoilers here:* Spoilers be damned, I felt it was worth noting that this escape room has some pretty big red herrings in it, which definitely adds to the difficulty. It also had a malfunctioning piece of equipment during our game (in December, 2015). These two points combined to make us a feel just a smidge cheated in being able make it out on time. But, we still had a fun experience overall.

After we finished, our game host told us that they were planning to change / fix certain elements within the Krampus room that were causing problems for participants, however, I don’t know whether that’s occurred or not. I do know that, while we did not escape, we came very close, and as a consolation we were given the “Almost Escaped” plaque to hold during the standard post-game promotional photo. Yay, us!

Countdown Live offers two other escape rooms, “The Spaceship” for sci-fi geeks and the “Tiki Palace” for Tiki-philes. We happen to be both, so I wouldn’t be surprised if we find ourselves back at Countdown Live Escape Games before long. 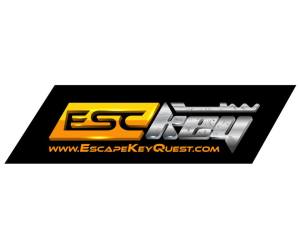 The West LA-based Escape Key Entertainment currently offers two escape rooms, “Casino” and “The Mystery of Senator Payne.” We opted for the more sinister-sounding of the two, and we’re not sorry that we did!

The story behind The Mystery of Senator Payne is that the Senator has gone missing and your group of up to 6 people are tasked with finding a missing bill — the ominously named “Bill 666” — which will lead you to his whereabouts.

The game starts out innocuously enough, with the group looking for clues in the senator’s office. But, things took a distinctly dark turn that had us saying, “well, that escalated quickly.” We won’t give away any details, but fans of the horror genre likely won’t be disappointed with this escape room.

Some interesting high-tech elements that we hadn’t seen before, along with some twisty, weird surprises made this room a win for us. Also, we managed to escape this one in 39 minutes! Yay, us!

The Paniq Room offers two escape rooms, “Bunker” and “Insane Asylum.” Guess which one we chose?

The Insane Asylum room’s website description simply reads, “You are a part of a medical team whose job is to solve the mystery of a patient who was locked into a mental hospital 70 years ago.” How could we pass that up?

We loved the theme of the Insane Asylum, but the set design of the room was a bit sparse in comparison to some of the other escape rooms we have done. The game was challenging and engaging, but there wasn’t as much to it in terms of variety.

Things did pick up in towards the end and we did manage to escape the room with 15 minutes to spare. Yay, us! Overall, it was a fun experience and we may go back and try their other room, “The Bunker,” as our game host hinted at that room being the better of the two. 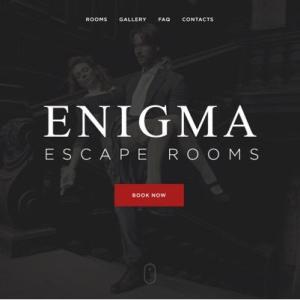 Enigma Escape Room offers three different rooms – “The Secret Temple,” “Apartment 205,” and “The Will.” We decided on a whim to give Enigma a try, and the only room they had available that evening was The Will. While we were gathered in the waiting room for the pre-game briefing, our host pointed out that Seth Rogan had done one of the rooms here once and had a great time. He also informed us that The Will was their newest room, and pointed out that it was different and probably harder than the other rooms. This was not the room Seth Rogan had done. He also explained that the game was linear in nature, to which our hearts sank a bit based on our experience with the linear game at The Basement’s “Boiler Room” (see above).

Still, we were up for the challenge and within minutes, the 6 of us were locked into a room that looked like a study. The game was, indeed, rather challenging, and there were alternating moments between us scratching our heads and trying silly things in an effort to figure out what we were meant to be doing. The Will escape room did feel a bit different than most of the others we have done – a bit less exciting somehow. Perhaps it was due to the linear nature, which meant there were less opportunities to split up and solve different things at different times. There were times when a challenge was set up so that only one or two people could be working on solving it, and everyone else had to just kind of wait, uninvolved.

Still, everyone was able to contribute something to the game at some point during its course, and we still had fun — and, in the end, we actually managed to escape. Yay, us!

It would be really interesting to compare the other rooms at Enigma to see how they stack up. After the game, our host reiterated how different their other rooms are from “The Will” and hinted at “The Apartment” being a more exciting game that is “like a movie.”