Little Monsters is likely the most adorable zombie comedy you’ll ever see. It’s a hilarious and heartfelt, vulgar and gory zombie rom-com (aka zom-com) that doesn’t take itself very seriously at all, while still managing to impart a message about maintaining positivity in the face of horror, and about the various minefields that adults (teachers… parents… slacker uncles…) must navigate in an effort to protect the innocence of children.

In this case the slacker uncle is David (Alexander England), a low-achieving former death metal band bro and all-around oblivious every-dude who has taken to busking on the street after the dissolution of his band, God’s Sledgehammer. When his long-time girlfriend breaks it off with him over the fact that he doesn’t want kids, the depressed David moves in with his sister, Tess (Kat Stewart) and her sweet Darth-Vader-and-tractor-loving son, Alex (Diesel La Torraca), where he quickly becomes a bad influence on the boy. But when David develops a crush on Alex’s sunnily-dispositioned, ukelele-playing kindergarten teacher, Miss Caroline (Lupita Nyong’o), he may have a chance to redeem himself by accompanying her and her class on a field trip to a petting zoo.

Of course, dangers lurk at this particular petting zoo, thanks to a zombie outbreak at the neighboring military facility. After a few brief moments of joy, including a Taylor Swift singalong and meet-n-greet with a popular children’s television personality, Teddy McGiggle (Josh Gad), the group finds themselves suddenly surrounded by dead-eyed flesh eaters, and the adults are put to the ultimate test as they must save themselves and the children from a potentially gruesome end.

Hilarity, cuteness, blood and guts ensue, bolstered by a brightly upbeat, shovel-wielding, zombie-killing, song-singing Nyong’o (who is delightfully charming in this role) (Miss Caroline’s kindergarten teaching techniques prove surprisingly handy in a zombie outbreak (who knew?)). An outrageously filthy Josh Gad (who seems born for this role), a clueless but well-meaning England (who plays clueless-yet-affable well), and a bunch of angelic kindergarteners round out the fun.

Little Monsters is full of laugh-out-loud moments, clever sight gags and cheeky, irreverent humor that pokes fun at its characters, while maintaining its sense of heart throughout. Writer/Director Abe Forsyth smartly juxtaposes the wide-eyed naivete of children with the cynical vulgarity of adults, puts them together against the slow marching horror of mindless zombies, then enlists the upbeat and spirited kindergarten teacher as the hero, and the result is fun, funny and very sweet.

For those who appreciate horror comedies with a bit of heart like Shaun of the Dead, or Tucker and Dale vs Evil or for those who simply appreciate the idea that a good Taylor Swift singalong can help you shake off just about anything, Little Monsters is for you.

Little Monsters is in select theaters this Friday, Oct 11th. 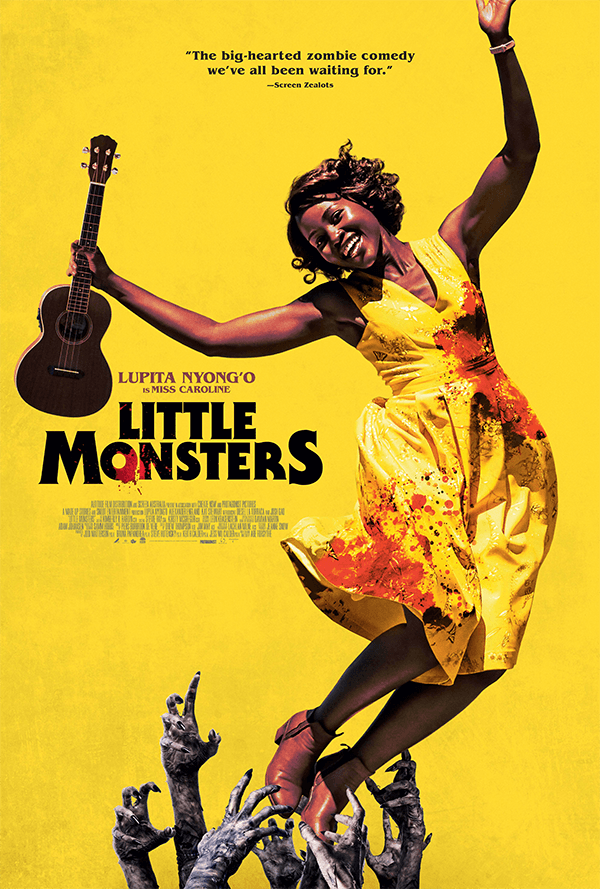