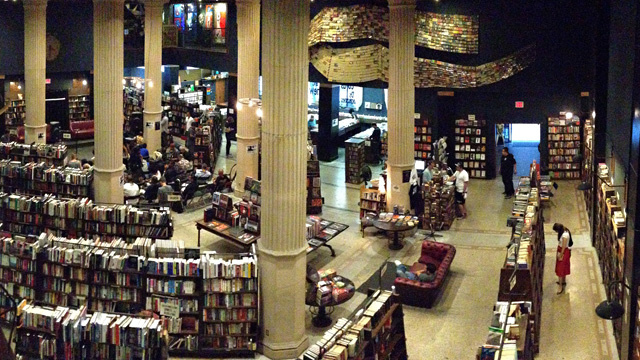 Those of you in the Los Angeles area looking for some spooky fun to to kick off your Halloween weekend can count on a ghoulish evening this Friday night at The Last Bookstore from 7:00-8:30pm as author and journalist James T. Bartlett (Gourmet Ghosts, Gourmet Ghosts 2) discusses the many ghost stories he’s collected while bar-hopping the City of (Lost) Angels and diving through the Hearst/LA Times archives over the years.

After regaling us with creepy tales of L.A.’s dark criminal history and resident ghostly spirits, Mr. Bartlett is planning to take everyone to the death scene of the building’s ghost, so bring your recorders and EMF meters if you’ve got ’em for any chance paranormal encounters.

Afterwards, why not sip a “Black Dahlia” cocktail at the nearby and reportedly haunted Biltmore Hotel? Sounds like a delightfully spine-tingling evening if you ask us.

From The Last Bookstore event page:

Just in time for Halloween, The Last Bookstore is pleased to welcome author James T. Bartlett, who is armed with poison, guns, jealousy, despair, serial killers, scandals and ghost stories in his new book Gourmet Ghosts 2. If you’re a fan of L.A.’s dark criminal history and the ghostly spirits that haunt this city – or just want advice on the best places to drink with the devil – this second guide to haunted bars, hotels and restaurants is worth investigating. James will be in conversation with paranormal fan and blogger Eric Larkin of our very own blog Dwarf + Giant. They’ll discuss deadly surprises – including the stunning suicide at the Hollywood Bowl, the scandal of the Alaskan Beauty, the Poisoned Peach, the Rose Murder and other weird and unbelievable moments – which he uncovered while bar-hopping and diving through the Hearst/LA Times archives. If there’s time, James may share the secret of the ghost that haunts the Last Bookstore building!

Originally from London, James T. Bartlett has been living in Los Angeles since 2004 and has been a freelance writer since 1999. He has been published in over 100 magazines and newspapers including Los Angeles Times, LA Weekly, American Way, The Guardian, Hemispheres, Delta Sky, The Telegraph, Variety, The Historian and Fortean Times. He is also a contributor to BBC Radio, BBCAmerica.com and BBC.com. Gourmet Ghosts – Los Angeles was published in 2012, and also launched at The Last Bookstore.