The months-long mystery regarding the theme for American Horror Story has finally been solved, so why are we still so confused? 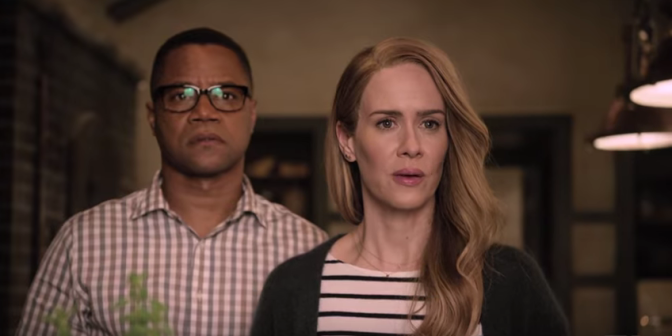 At long last it was revealed that American Horror Story Season 6 revolves around the mysterious “Lost Colony” of Roanoke – a theme which had been speculated for well over a month after leaked photos from the set appeared on TMZ on August 1st.

Subsequent to the leaked set photos, FX released dozens of fun, creepy teasers – clever misdirects designed to heighten the suspense and mystery leading up to the premiere. The teasers played up a variety of horror tropes but revealed nothing of the Season 6 (aka “?6“) cast, plot or theme. Only one teaser, according to FX, hinted at what was to come. We now know, after watching the premiere, that the revealing teaser was the one featuring human teeth.

But it was not so much the theme that raised questions during the premiere last night, it was the format. Delivered in a documentary, “eye-witness account” style in which a majority of the episode occurs as a re-enactment, the premiere played out as an episode of a docu-reality show called “My Roanoke Nightmare: A True American Horror Story,” with Lily Rabe as yoga instructer Shelby Miller, Andre Holland as her husband, Matt, and Adina Porter as Matt’s sister, Lee, recounting their harrowing story of moving into a remote historic house where strange and terrifying events begin to unfold, while Sarah Paulson, Cuba Gooding Jr. and Angela Bassett respectively played their counterparts via ‘dramatic re-enactment.’ If that sounds a bit confusing to you, you’re not alone.

Me watching the first episode of #AHS6 pic.twitter.com/9h0m0DmwQ9

Previous seasons of American Horror Story have featured separate story lines occurring in or across different time periods, but the format for last night’s premiere was a unique break from any previous format we’ve seen on the show. So different, in fact, that many people, including myself, were left wondering whether this was a style that they would keep up throughout the episode – much less throughout the entire season. Sure, the camera could theoretically at some point pan down to reveal that Lily Rabe’s character is missing her legs because they were hacked off by a cannibalistic colonialist, but, as a whole, if we know the apparent main characters have survived their mis-adventure and are now appearing on a tv show, don’t we lose some of the overall scariness and suspense? It will be interesting to see how the format plays out in subsequent episodes.

In another break from American Horror Story tradition, noticeably missing were the themed opening credits and signature theme song from past seasons, and, while several long time cast members and fan favorites appeared in the episode, including Rabe, Paulson, Bassett, Denis O’Hare and Kathy Bates, others were missing, including series staple Evan Peters, who was absent from last night’s episode, but whose name did appear in the closing credits. Also missing from Episode 1 and from the end credits was Lady Gaga, who had been previously confirmed to appear this season.

While the show-within-a-show was titled “My Roanoke Nightmare,” and while Kathy Bates did appear toward the end in colonial garb, there were few details revealed or touched upon regarding the mystery of the Lost Colony. Even the ending left people wondering, as viewers were instructed to go online in order to see a preview of next week’s episode. All this, combined with the unconventional format left some fans unsure what to feel.

#AHS6: No theme song, No preview of next episode, No Evan Peters or Jessica Lange

So let me get this right#AHS6 ended 4 minutes early, had no Evan Peters in it & I still don't understand the theme pic.twitter.com/YRvSlTVH4f

The fact that many fans were left with more questions than answers is likely ok with show creators and FX executives, because along with some effectively scary moments and an appropriately cool and spooky setting, AHS6 – which has officially been confirmed as AHS: Roanoke via the show’s social media accounts today – certainly begs watching next week to see how this unusual season unfolds. I mean, not only was the first episode weird as hell, there were a bevy of mysteriously intriguing elements introduced, including a pig-man, human teeth raining from the sky, Blair Witch-inspired stick figures, creepy figures in the woods, a scalping and an angry mob with pitchforks and torches.

For better or for worse, American Horror Story is back, folks.

What did you think of the first episode of American Horror Story: Roanoke?